HELP! What’s happening with my beans?

There seems to be a massive misconception of what tipping, scorching, blowing, burning or whatever else people call it is. Part of the problem is there is no naming convention. Does “Roaster” refer to the person or the machine. Is “dropping” taking the beans out or putting them in? Is “Tipping” and “Scorching” the same and how do we spot either of them?

Well, I don’t know who decides on the exact naming conventions, but here is my take on it:

The word “tipping” most likely refers the phenomenon where the “tip” of the bean burns black. That makes sense to me, at least. ‘Nuff said. If you have a different opinion, please keep it to yourself (having your own blog has its perks). 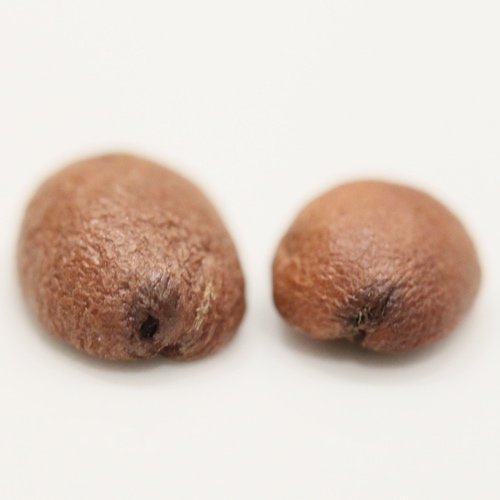 Tipping happens when the beans experience any temperature too high for the bean’s heat-transfer coefficient. i.e. there is so much energy (heat) around a specific part of the bean that the bean cannot absorb/conduct/disperse the energy fast enough. The only choice left is to burn in that particular area.

An analogy can be found in any form of meat grilling. Take a look at the picture below. A simple lamb chop on the grill has tipping around the edges. This is caused by too much heat at any one time, causing the meat to char instead of cook. This is exactly what happens to the beans: there is too much heat for bean to take up, so it burns.

So when does tipping occur? Truth is that we don’t know exactly. The definition above tells us that it can happen at any time; whenever the temperature is too high during the roast. It can happen because of too high a charging temperature (the starting temp), too high a ramp during roasting…too much heat anywhere!

The next question is whether this is caused by convection or conduction heat? In other words: is the drum too hot or is the air too hot? The answer is: either. Tipping is a factor of the beans, not the environment, the roaster, the drum or air temperature. The fact is that the BEAN cannot handle it.

Take a look at the image below:

The colours show the difference in temperatures inside the beans. It is clear from the image that, if anything should burn, it would be the tips of the beans! But this changes depending on the bean: Try finding tipping in peaberries. Because the peaberries are round and has almost no distinct “tip”, the chances of tipping happening are much smaller in peaberries.

So is tipping a bad thing? That is a question only the drinker can answer. Let my try to put this in a way that we all can understand:

In other words, is the coffee tastes bad, then tipping is bad. If your coffee tastes good but you have  tipping, then surely tipping is not a bad thing!! Is the “tipping” on the lamb chops photo above a bad thing? No, we all love a little char-grilling on our chops. But surely this is per definition a burnt chop? Well, possibly so, but it still tastes great!  The chances of tipping affecting your roast to the point of having to dump it all is very slim.  Chances are that your chosen profile or roast degree is waaay, waaaay off and that tipping is only a very small part of the problem.

So if tipping is the a burnt spot on the tip of a bean, then what is scorching?  To me, scorching is bad practice. Not necessarily a bad tasting bad practice, but one that points to inexperience on the roast-master’s end.

Scorching happens when the bean touches a surface that is too hot for the thermal-conductivity of the bean. Exactly the same as for tipping, but almost exclusively caused by conduction heat. In layman’s terms: your drum was too hot!! Try a cooler charge temperature or reduce the ramp-time of your profile to negate any scorching. You should not need to scorch the beans in order to achieve your preferred roasting profile.

Scorching is different from tipping that it typically presents on the flat side of the bean. It is a larger spot that is burnt black. 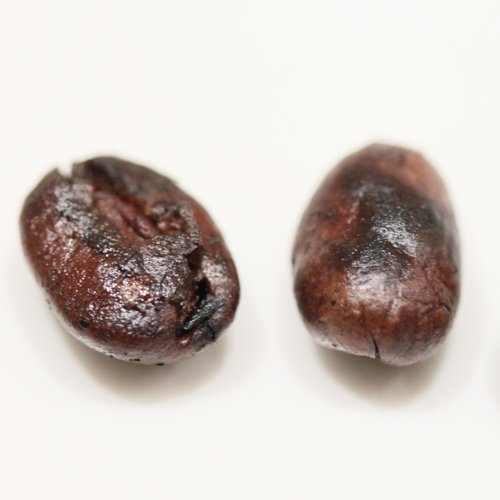 So what the hell is a crater then?

There is a lot of confusion between craters and tipping. The two are VERY far apart. Cratering happens near or into second crack where the pressure inside the beans is released at such a high rate that the bean’s surface cannot handle the release. This is per definition “second crack”, but in the case of cratering, the second crack was brought on so much that it affects the structural integrity of the bean and literally blows a piece off when the bean releases the built-up gasses inside the bean. 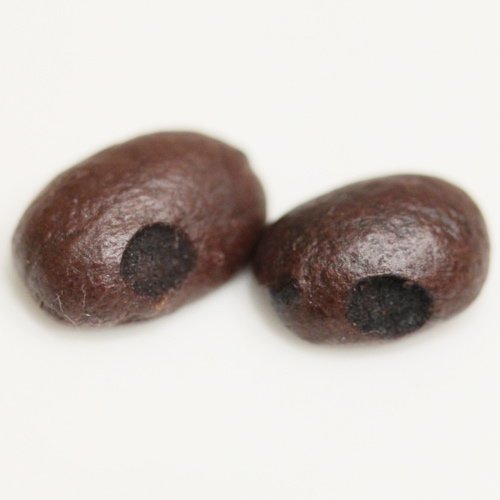 What to do about it all?

If you decide that tipping, scorching or cratering is the cause of any unwanted flavours in your bean, here’s what to do:

Tipping: Reduce your charge temp and  do a slower, more gentle roast.  Increasing your convection heat should also help, as well as increasing the batch size and drum speed.  The best would be to roast  longer and gentler to allow your beans enough time to absorb and distribute the energy that you are trying to force into them.

Scorching: Reduce your charge temp and increase your drum speed.  The less time the bean spends on the side of the  drum, the less scorching you will have.  Try to maximize your convection heat and minimize your conduction heat, i.e. transfer your energy by means of hot air instead of a hot drum.

Cratering: Don’t roast so damn dark!!  Also, increasing the time from first to second crack and taking a  gentler approach will help to prevent cratering.  Dial back  on your gas pressure once you reach first crack and let the beans carry themselves into second crack.   If you force more and more energy into the batch, it stands to reason that  “something’s gotta give”.   In this case, the whole bean is splintering apart  because of your need for burnt coffee!